I am not certain what I expected when we started the second leg of our family trip to The Netherlands in Leeuwarden, located north of Amsterdam in the province of Friesland, but it became clear quickly this would be a very special time of remembering the airmen on the last flight of Lancaster R5682 of the 61 Squadron Royal Air Force. Located in our room were several items about our weekend, including a booklet containing remembrances of each airman written by their families. As I read the texts, a sadness enveloped me as I became more aware of the great sacrifice each made to liberate Europe from Germany’s tyranny. The texts were placed in order that each jumped from the crippled bomber on September 5, 1942: James Francis Cooper, Ted May, Philip James Bridgeman, Eric Underwood Booth, Neal Douglas Mullins, Bertram Arthur Farmer and Peter Clement Vellacott Joslin, the pilot, who remained on board until the last moment to release the four bombs on board the aircraft.

The people of the province of Friesland went to great effort, first of all, to salvage what remained of the aircraft last fall in September/October 2017 in what was once a landfill in the early 20th Century. Not only was the land contaminated, it is also marshy. Therefore, this was no easy recovery. It had to be carefully planned and smartly executed. After five weeks of digging, this phase of the project was complete. 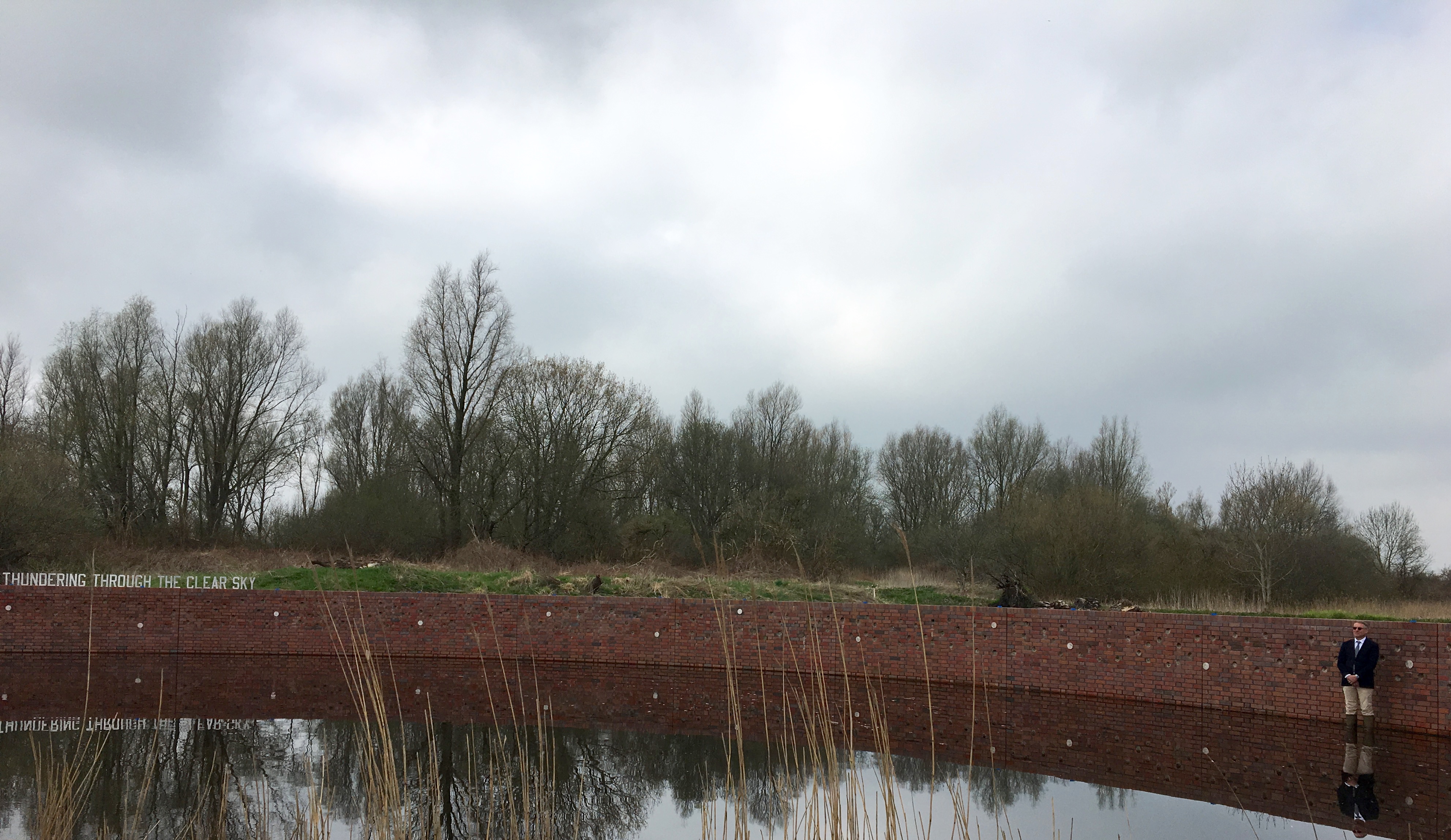 Architect Nynke Rixt Jukema was tapped to create a monument at the site of the crash, which is now a nature reserve. Her firm, NRJ Architecture, focuses on environmental design. The large brick memorial is the same length as the wing span of the Lancaster bomber. Inside the memorial are 251 holes, representing the 251 aircraft which were airborne from England to Germany the night Lancaster R5682 was shot down. All but 12 of the holes were filled with sand in the hopes that swallows who nest in the area will make homes there. Thus, the monument not only honors the airmen of R5682 on its final flight, but it also represents the return of life.

On top of the monument is the text, “Thundering through the clear sky,” a reference to the motto of the 61 Squadron. 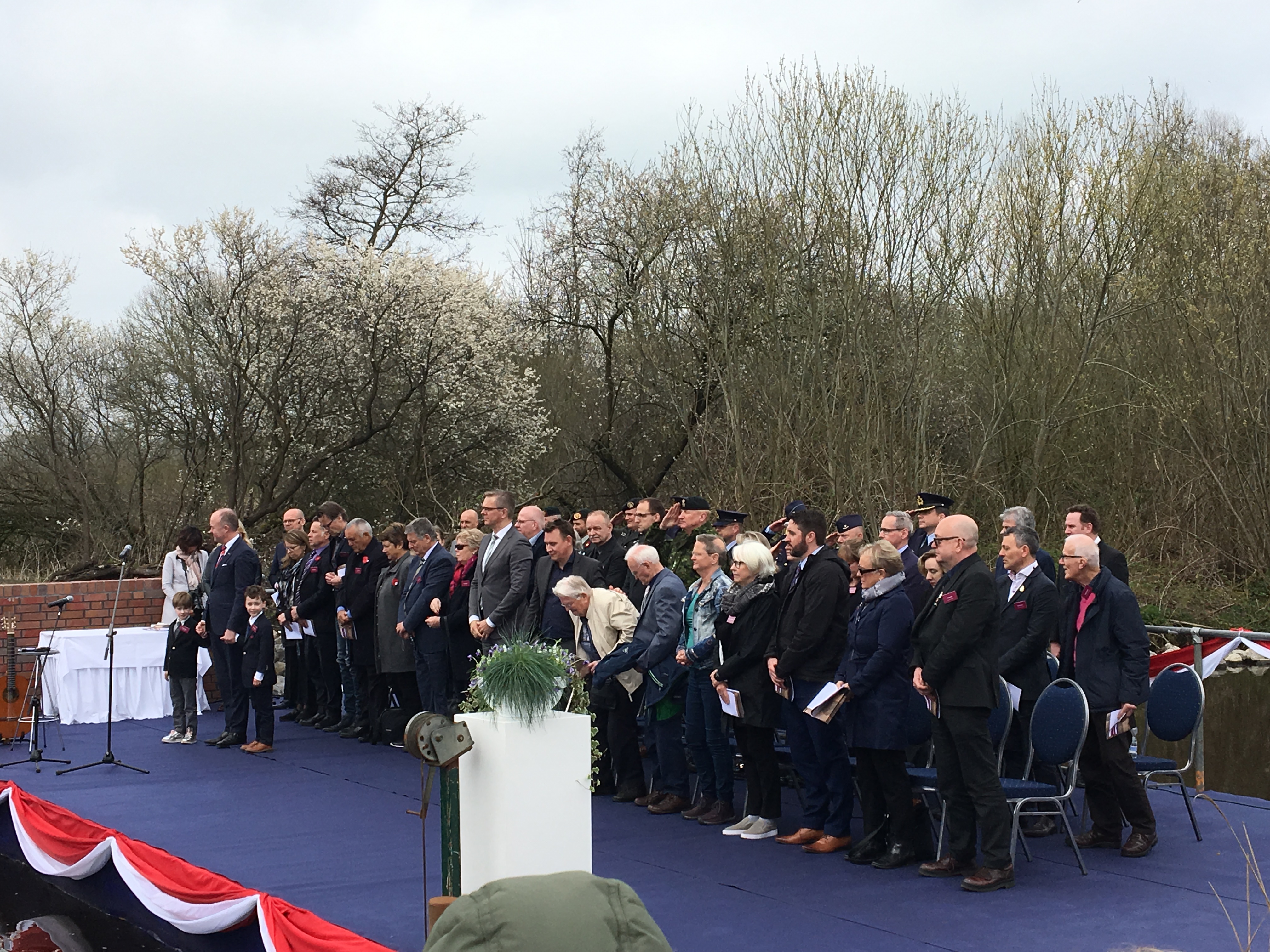 On Sunday, April 15, 2018, all of the family members of the crewmen, along with various members of The Netherlands military and Frisian civilians involved with the project, gathered for a memorial ceremony and unveiling of the monument. One by one, the family members read the texts they had written for their loved one. 12 metal cylinders, made from metal from R5682, were placed inside the monument with these special messages inside, twelve representing the number of aircraft which did not return from the mission that night. 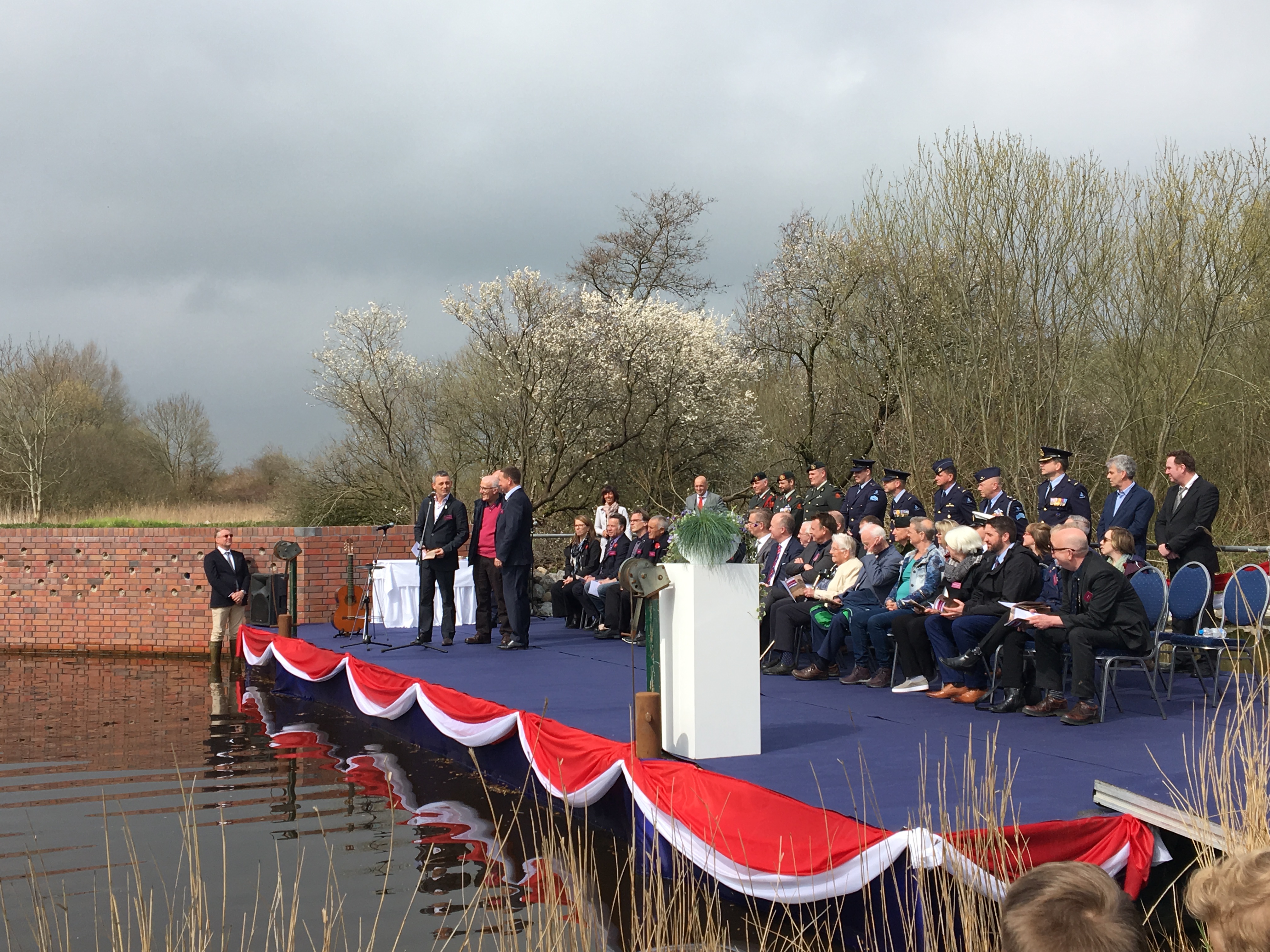 As pilot, Peter Joslin’s, son and two grandsons came forward to read their text, the clouds parted, and the sun shone brightly on their faces. Joslin’s grandson, Andrew, remarked that it was the second time they had visited this site that the clouds had broken. The first time the clouds parted was when a Lancaster bomber flew over the site of the crash on October 3, 2017, during the recovery of the remains of R5682. Some say God does not speak to us anymore. I say you need to open your eyes, hearts and ears because God does speak, and he spoke quite clearly those two days.

We lost three brave men from R5682 on September 5, 1942: James Francis Cooper, tail gunner, who remains MIA, Edward Joseph “Ted” May, bomb aimer, whose parachute did not open, and Peter Joslin, who remained with the aircraft until almost the end so his crew could abort and the bombs dropped to minimize damage. The weekend we enjoyed together as families would not have occurred if not for his valor, and quite a few in attendance would not have been born had he not made this sacrifice, including my twins, Nathan and Vivien. 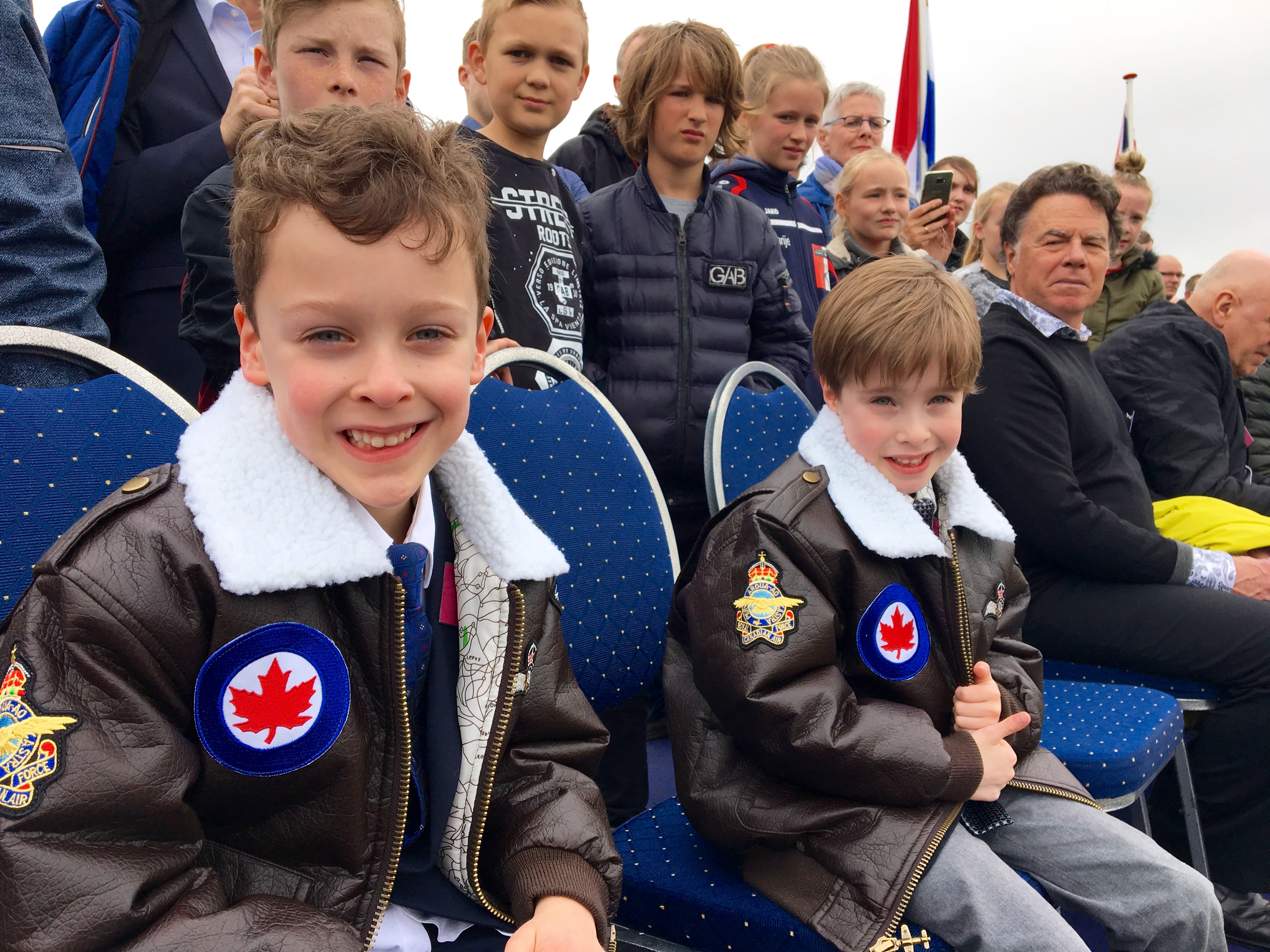 The words “thank you” do not suffice.

The four who survived their jumps: Bridgeman, Booth, Mullins and Farmer, were arrested, interviewed and imprisoned by the Germans until their liberation in 1945. Each one found his own way of rising above those horrendous years, living long, full lives following the war. Philip James Bridgeman, navigator of R5682 and a gifted writer like his father, James Newman Bridgeman, began a memoir before his death. In it he wrote, “One should not expect more from anyone else than one is willing to give of one’s self.” These seven men gave more.

Post Script: A tremendous thank you to everyone in Friesland who were part of the recovery of R5682 and the planning and execution of the events of the weekend, which included meals, lodging, transportation, receptions and the memorial ceremony, not to mention the thoughtfully designed memorial and the beautiful swallow sculpture, a parting memento for the families, crafted from metal of R5682. 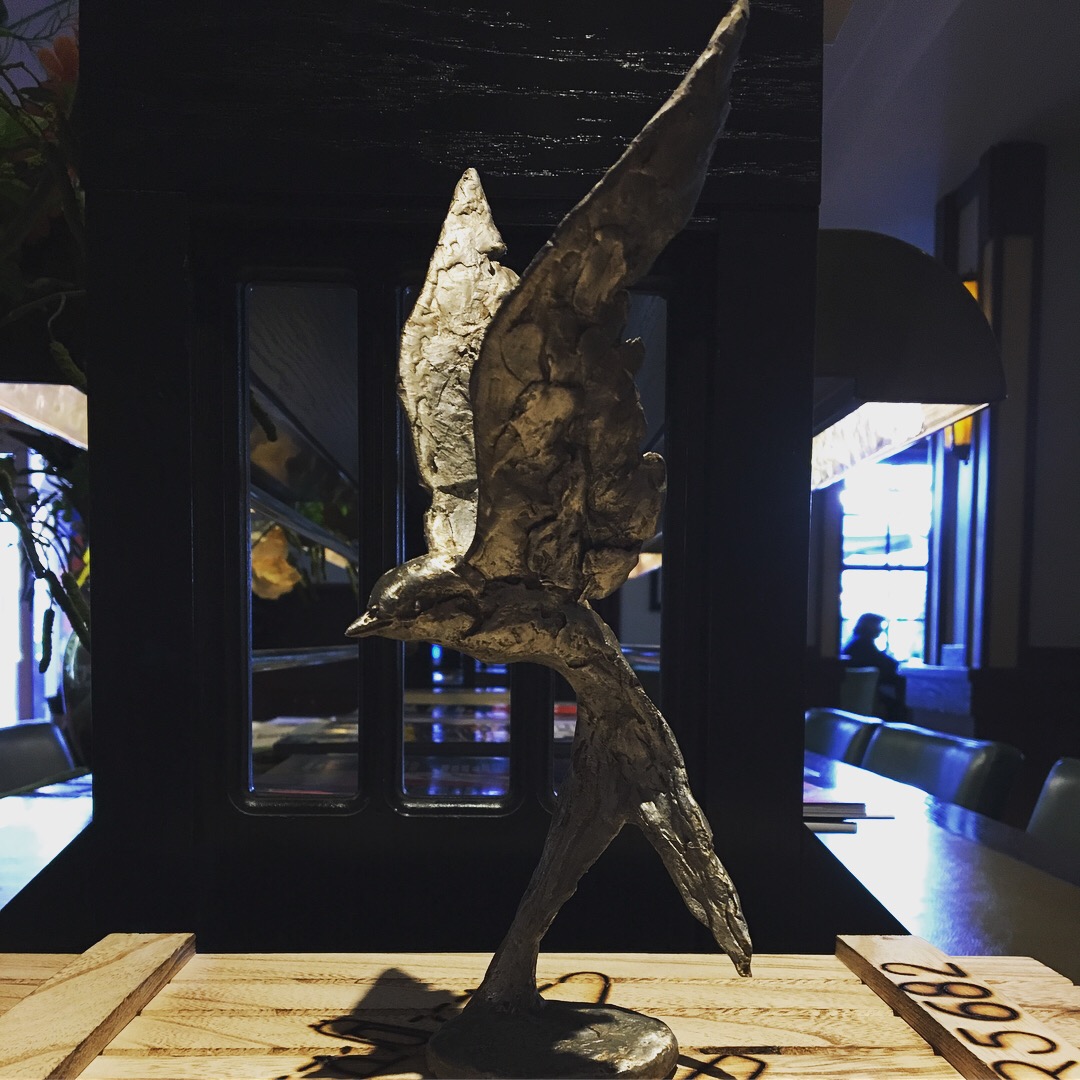 We know you feel bound to honor the men who had a hand in liberating you, so we understand the thanks works both ways. But you went above and beyond. Thank you for everything. These are special memories we will have for a lifetime.

Let’s discuss your needs and goals through a free consultation.