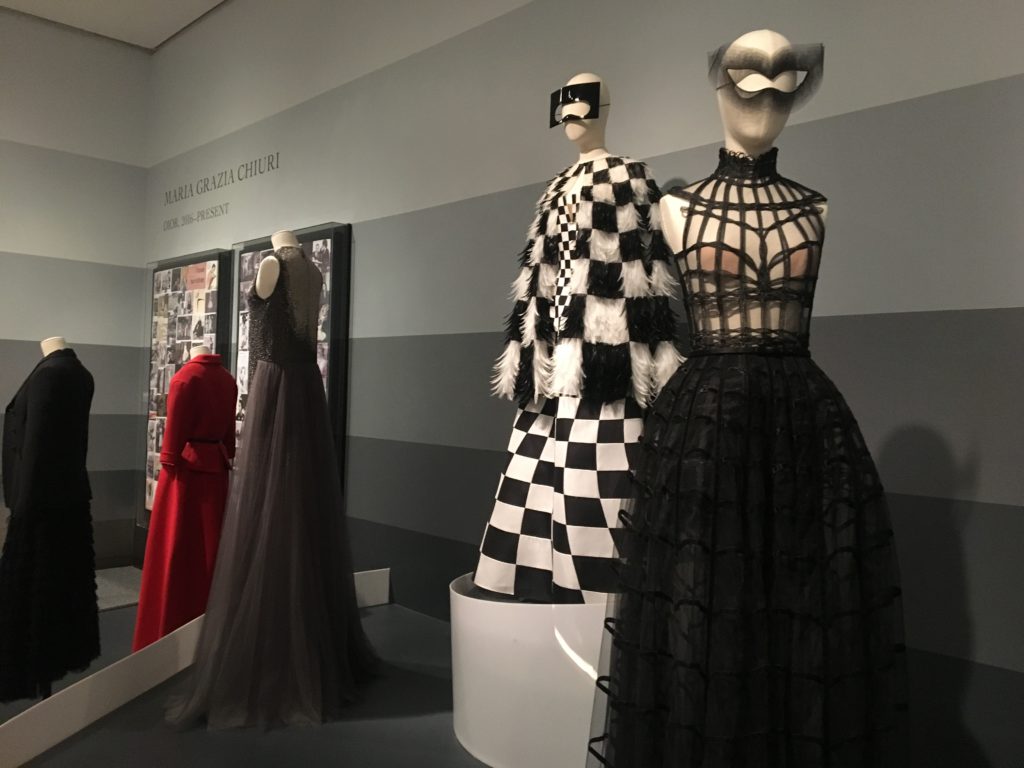 This blog post was first published on Southern in Seattle on October 7, 2019.

Some might consider Chrstian Dior a late bloomer when he debuted his first collection on February 12, 1947 at the age of 42. There’s something to be said about taking your time because his fashion debut made international headlines and the clothing was heralded as “The New Look.” Not everyone loved the debut, saying it was wasteful during a time when many were still suffering from wartime woes. Others deemed the shape too sensuous. Regardless, Christian Dior forged ahead, and he is thought by some to have modernized fashion more than any other designer.

I had the pleasure of visiting Christian Dior – From Paris to the World at the Dallas Museum of Art, not once but twice, during the summer of 2019. The exhibit debuted in Denver, CO at the Denver Art Museum. The Victoria & Albert Museum in London put on its own Dior retrospective in early 2019. Apparently, Dior was on the brain.

In 1947, Mr. Dior made his first trip to America to Dallas, Texas to accept the prestigious Neiman Marcus Award for his distinguished contribution to fashion. This began a long friendship between Stanley Marcus and Mr. Dior, who allowed Dallas to host the only American show of Dior’s 1954 H line collection.

The fashion house of Dior has a history of rich talent. After Mr. Dior’s untimely passing in 1957, the young Yves Saint Laurent took the design helm from 1958 – 1960. He left to open his own couture house in 1961.

From there, Marc Bohan assumed the reins for 29 years. During this time, he continued Dior’s classic elegance and dressed Princess Grace of Monaco and her daughters, Caroline and Stephanie. Curiously, very few Bohan pieces were displayed in this exhibit despite his long run as creative director.

Gianfranco Ferre led the design at Dior from 1989 – 1996, shocking the fashion world that a non-French designer was appointed.

The mercurial John Galliano served as Dior’s creative director from 1997 – 2011, imbuing every collection with his signature provocative flair. The DMA exhibit featured many Galliano designs, no doubt for their show-stopping effect.

After Galliano’s sudden dismissal in early 2011 following anti-Semitic remarks he made to Italian tourists in a Paris bar, Dior did a 180 by naming the “minimalist” Raf Simons as artistic director in 2012. If you’ve not seen the documentary “Dior and I” about Mr. Simons’ debut collection for Dior, rent it. It will give you an appreciation for the artistry, talent and attention to detail that is required of a well-regarded, famous fashion house. Many of my favorite pieces from the exhibit are by Mr. Simons. His work at Dior was elegant and quietly dramatic, especially when juxtaposed with Galliano.

Maria Grazia Chiuri, the first woman artistic director for Dior, has been in the post since 2016. Her designs are modern and in touch with what is happening in the world.

The exhibit spanned eight rooms and easily took 3-4 hours to fully enjoy. Mr. Dior could not have dreamed his fashion house would display a vast archive of Dior designs in Dallas, Texas, 72 years after first traveling there. Many fashion houses have come and gone, yet Dior endures.

“By being natural and sincere, one often can create revolutions without having sought them.”―Christian Dior

All photos are my own.